At the art academy in Amsterdam we had an exchange program with PRATT New York. One of the students was the Korean photographer Diana Cho, and after sharing some art classes we fell in love. After half a year she returned to New York and the last thing she gave me was a kiss and a Five Dollar bill saying: ‘This will be your LUCKY NOTE…’
Quite some years later, I had been painting on One Dollar bills and wanted to move on up in the world, and remembered ‘My Lucky Note’. I found it back immediately, not something very common in my studio. When I sat on the floor staring at ‘My Lucky Note’  waiting for inspiration… It was one of those rare moments that an Amazing Story unfolded right in front of my very Eyes… One normally needs loads of hallucinogenics to really see a sort of animation popping up out of nothing. But now It happened in a magical moment, it was dancing in front of my eyes. In a split second I saw a story covering millions of years: All I had to do is paint it … on the bill.

So I painted on my ‘lucky Note’ and rushed of to the bank to get some more 5$ bills…
And PAINT: THE AMAZING STORY of the REINCARNATIONS of ABRAHAM LINCOLN

Stage 1
The first reincarnation of Abraham Lincoln: The first time our Noble Friend visited planet Earth, dinosaurs would dance in delight whenever He came by. Carrying one of the world’s oldest flowers: The Magnolia. It is said that He was able to maintain a full week of peace among the wild beasts of the Jurassic Era.

Stage 2
Ages ago in Atlantic times… Sri Abrahman Lincolniji was a peaceful Saddhu roaming the roads of ancient India. It is said that animals would spontaneously start meditating at His side. His most famous saying still counts today: ” Trust is Enlightenment”

Stage 3
Scientists were amazed when I discovered that Abe’s third reincarnation was the twelfth century ‘Prince of Thieves’ : Robin Hood! Still the greatest Medieval Hero. Stealing from the rich giving to the poor. He was never caught by the authorities, but fooled them time after time, and died in peace among his people.

Stage 4
Abraham Lincoln as we know Him; the poor boy turning “The King of Presidents”. Being born on 12 February 1809, the same day as Charles Darwin, the founder of the evolution theory, Abraham Lincoln is quickly becoming the icon of the Reincarnation theory. “Those who deny Freedom to others do not deserve it for themselves .” Diminishing slavery in 1863 was probably the Greatest Achievement of our melancholical Statesman. On April 15th 1865 He was brutally murdered in a racist conspiracy, and left Earth for almost a century. 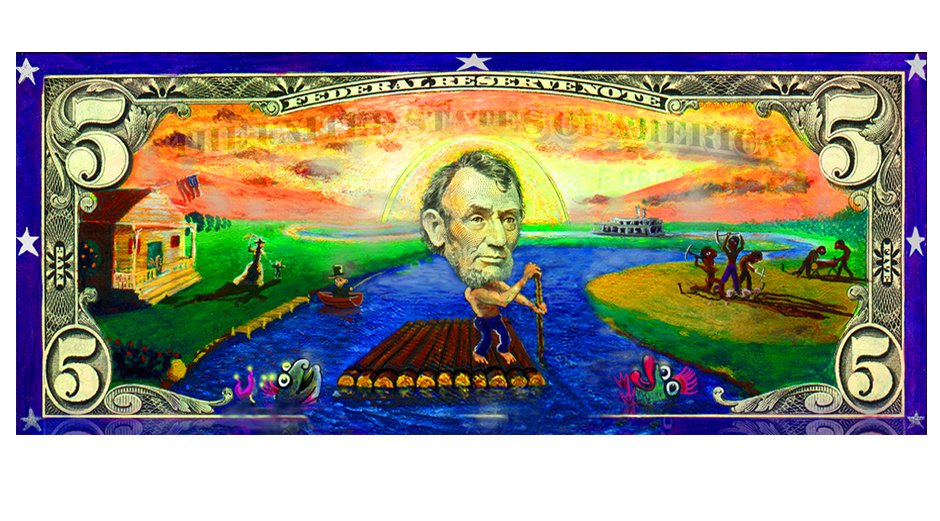 Stage 5
In the early 1960’s Dr. Abrahdread was a solitary Sage on a small Caribbean Island, where He would teach the local youth Rasta-philosophy and the use of Holy Herbs. He told that music would be the new Language of Man, and the greatest weapon in the struggle for Liberation. When Dr. Abrahdread saw that local youthman Robert Nesta Marley had taken the Spark of his Message, and carried it out to a World Wide Fire, He simply disappeared up in smoke into Heaven.

Stage 6
Even though the dollar bill indicates only 5 stages of reincarnation, there is a sixth one. Abe has lately been seen in Wales, Mexico and on Higher Astral levels. He is an Leprechaun, now, promoting the Magic Mushroom for Human Evolution and World Peace.